Welcome to Bijin-ga Rhapsody Encore: The Beautiful, Beguiling, Beloved World of Japanese Beauty Paintings, a special exhibition examining depictions of women in modern Japanese art. The original Biijn-ga Rhapsody exhibition was held in spring 2020 to great acclaim, though the exhibition period was shortened to help prevent the spread of Covid-19. This ‘encore’ delves once more into Umi-Mori Art Museum’s collection to explore how women were portrayed by a diverse range of artists from the Meiji era to the early Showa era.
‘Bijin-ga’ (paintings of beautiful women) first emerged in Japan during the early modern period. From the Meiji period onwards, this format became one of the major established themes of Japanese painting. In their own individual ways, painters like Uemura Shoen (1875–1949) and Kitano Tsunetomi (1880–1947) were inspired to create works on the theme of feminine beauty.
Other artists took a totally different approach to painting women. Chigusa Soun (1973–1944) studied the naturalism of Western art and he tried to reform Japanese painting. He also strove to depict the truth of society rather than solely focusing on beauty. To this end, his paintings portrayed women at work, often with exhausted expressions. One of his students was Hada Teruo (1887–1945), an artist who also tried to paint people in a way that confronted the contradictions in contemporary society. These attempts to portray women in a manner transcending surface beauty are also apparent in Kainosho Tadaoto’s (1894–1978) vivid depictions of nudity and Masuhara Soichi’s (1893–1927) portrayals of beguiling beauty.
Using works depicted at last year’s exhibition as well as some new exhibits, this ‘encore’ presents of an overview of the ‘bijin-ga’ genre from the perspective of four chapters: ‘Beauties and the Four Seasons,’ ‘The Lives and Lifestyles of Women,’ ‘Women’s Fashion–Addition and Subtraction,’ and ‘Bijin-ga and the Depiction of Girls.’ The exhibition strays from the traditional image of bijin-ga to reveal how portrayals of women changed throughout the modern era through paintings that pushed the boundaries of the genre. All these works by different artists flow together to produce a ‘Bijin-ga Rhapsody.’ This exhibition will provide a wonderful opportunity to examine the varied portrayals of feminine beauty and the lifestyles of women, as revealed by the idiosyncratic paintings of each artist. In doing so, viewers will be able to verify the significance of the bijin-ga genre and its impact on painting expression in the modern era.
The organizers

Chapter One: Bijin-ga and the Four Seasons

Depictions of women have a long history in Japanese art. From the Meiji era onwards, though, depictions of beautiful women emerged from private spaces to become the subject of appreciation in the public arena of the exhibition. Bijin-ga, or paintings of beautiful women, began to appear with increasing frequency, particularly after the first Ministry of Education Fine Arts Exhibition (Bunten), held in 1907 (Meiji 40). This trend culminated in the introduction of a special room for the display of bijin-ga at the 9th Bunten exhibition, held in 1915 (Taisho 4). This marked the recognition of bijin-ga as a unique genre of Japanese painting. Many modern artists now focused on portraying feminine beauty in their own individual way.
Japanese clothing and lifestyles are intimately connected to the four seasons. With all their familiarity and rich changeability, the four seasons also presented a perfect setting for the depiction of women in various situations.
This chapter features depictions of beauties amid the four seasons, as filtered through the unique aesthetic sensibilities of each artist.

Chapter Two: The Lives and Lifestyles of Women

Many painters chose to portray women in a manner not exclusively focused on idealized beauty. Japanese society developed in leaps and bounds from 1868’s Meiji Restoration onwards, but these events also created many poor people who were left behind by the rapid changes. Several artists turned their gaze to these social contradictions.
Chigusa Soun tried to incorporate the naturalism of Western art into Japanese-style paintings. He also strove to depict ‘essence’ rather than ‘beauty.’ His paintings shine a sharp light on the lives of the working classes and people on the margins of society.
Numerous other artists also tried to depict the day-to-day business and everyday lifestyles of real women. One representative example is provided by Mitsuyu Chihagi’s Knitting. Artists also took inspiration from their own wives and children as they tried to capture the feminine form, as epitomized by Hada Teruo’s two Mother and Child paintings.
This chapter features paintings that portray women vividly in a manner that transcends surface beauty.

Beautiful clothes and accessories are one charming aspect of bijin-ga paintings, with the genre representing contemporary fashion in all its multiplicity, from colorful kimonos and diverse hairstyles to make-up and Western-style clothing. Paintings were often criticized for focusing on this kind of external beauty, but just as ukiyo-e woodblock prints served as style guides in the Edo period, so many modern bijin-ga paintings were accepted by women as kind of fashion template.
Women in the process of dressing up was a popular theme in ukiyo-e. This also became a subject of bijin-ga during the Taisho era, with several artists producing lustrous, atmospheric paintings of women getting ready, as epitomized by Okamoto Shinso’s Woman Having Hair Combed and Masuhara Soichi’s Summer Evening.
If clothes and cosmetics are examples of addition, then nudes represent the art of subtraction. Kainosho Tadaoto studied nude models before trying his hand at nude paintings.

Chapter Four: Bijin-ga and the Depiction of Girls

The Education System Order of 1872 (Meiji 5) gave a boost to mixed-sex education, with the proportion of Japanese girls enrolled in school topping 90% during the early 1900s. This trend led to the publication of several commercial magazines aimed at women. Pictures of young girls were now in demand as covers and illustrations for girls’ magazines like Shojokai and Shojosekai. This facilitated a growing interest in girls.
Takehisa Yumeji found fame for his depictions of melancholic young ladies, with his art often featuring in girls’ magazines. Yumeji’s friend Hada Teruo sketched children at elementary schools or kindergartens, with the results of his studies apparent in Playing Games, a work depicting children at play.
From the modern era onwards, many artists also painted portraits of maiko, or girls training to be geisha.
This chapter introduces paintings of girls in all their rich diversity. 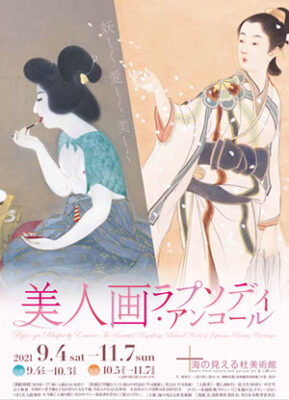